Introduction/Theme
7 Wonders is basically a card game with lots of civilization building aspects. Despite the fact that it is played quite fast (about 30 minutes), it offers some fine strategic depths. It has won lots of prices yet and is actually ranked #12 on boardgamegeek.com.

Components
The game comes with little boards, lots of nice cards as well as coins and markers. The components are of premium quality and will last many, many plays without being harmed. Also the layout is well done and adds to the atmosphere of this civilization building game.


Gameplay
7 Wonders lasts for three ages, each one consisting of six turns. In each age seven cards are dealt to the player whereas each player chooses one card per turn and then passes his hand on to his neighbour for the next turn. Depending on the respective card one out of three actions can be chosen. You can either sell your card to get money, you can build a construct (or produce resources) or you can work on building your wonder. The constructs can be military, scientific, civilian, commercial or guilds and different conditions lead to different amounts of victory points - with the one finally having the most victory points winning the game.


Conclusion
Even if it takes some time to go through the rules, the game is very accessible and during your first play you easily understand what's going on - even if you are not that experienced when it comes to board games. So it's a must-have for fans of building games, as despite the quite short playing time lots of aspects of civilization building games are covered. Also it balances complexity and strategy pretty well, so that the game appeals for a broad audience. One of my most played games in the last months... give it a try! 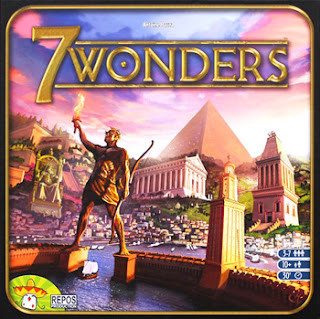 From the publisher: 7 Wonders lasts three ages. In each age, players receive seven cards from a particular deck, choose one of those cards, then pass the remainder to an adjacent player, as in Fairy Tale or a Magic: the Gathering booster draft. Players reveal their cards simultaneously, paying resources if needed or collecting resources or interacting with other players in various ways. (Players have individual boards with special powers on which to organize their cards, and the boards are double-sided as in Bauza's Ghost Stories.) Each player then chooses another card from the deck they were passed, and the process
repeats until players have six cards in play from that age. After three ages, the game ends.

In essence 7 Wonders is a card development game along the lines of Race for the Galaxy or Dominion. Some cards have immediate effects, while others provide bonuses or upgrades later in the game. Some cards provide discounts on future purchases. Some provide military strength to overpower your neighbors and others give nothing but victory points. Unlike Magic or Fairy Tale, however, each card is played immediately after being drafted, so you'll know which cards your neighbor is receiving and how his choices might affect what you've already built up. Cards are passed left-right-left over the three ages, so you need to keep an eye on the neighbors in both directions.

Though the box of earlier editions is listed as being for 3-7 players, there is an official 2-player variant included in the instructions. 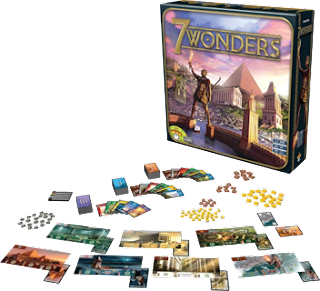