Introduction/Theme
Merchants & Marauders is a gem in the area of pirate board games. A fact which I really appreciate - as a lot of games exist in this field, but not many cover all aspects of piracy. Merchants & Marauders features most actions you can dream of in this setting and allows you to focus on either trading or pirating or both... ;-)

Components
The content of the quite huge box leaves nothing to be desired. The artwork is colorful and coherent, the map (shows the Carribean split into sea zones) is made of thick cardboard and there is a lot of stuff included. Especially I want to mention the beautiful plastic miniatures representing the ships as well as your Captain cards, defining your figures abilities (which can be improved during the game by the way).

Gameplay
The main goal of the game is to score 10 glory points - the first player reaching this level wins. Glory can be gained in lots of different ways, e.g. in combat, trading, by completing missions and so on. At the beginning each player is dealt a captain card and then can decide each turn to either use the action "Move", "Search" or "Port". Whereas "Port" offers again lots of different possibilities to choose from (recruiting, missions, buy/sell goods, upgrade ship,...) After each players turn an event card is dealt which brings some random effects into the game which have to be worked with.

Conclusion
Despite the fact that there are quite a lot of rules (which are structured very well ), it's easy to get into the mechanics - especially after your first full game. The downtime is usually quite low and the atmosphere matches the theme pretty well and is convincing. Merchants & Marauders offers a lot of different possibilities and you can follow different strategies to win. It's up to you if rely completely on capturing ships or if you focus only on trading or if you choose something in between. It's possible to win with each strategy and this variety makes the game really outstanding. 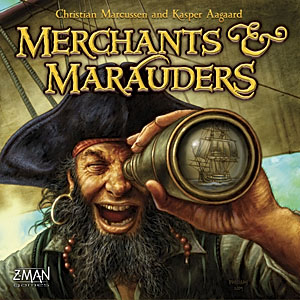 From the publisher: Merchants & Marauders lets you live the life of an influential merchant or a dreaded pirate in the Caribbean during the Golden Age of Piracy. Seek your fortune through trade, rumor hunting, missions, and of course, plundering.

Will your captain gain eternal glory and immense wealth or find his wet grave under the stormy surface of the Caribbean Sea? 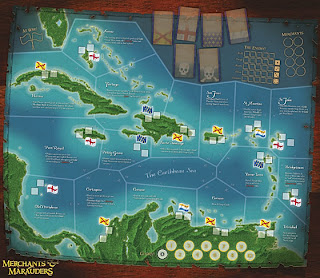 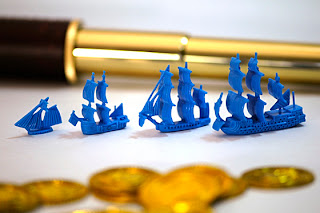