There have been a lot of interesting new products and successful Kickstarter campaigns for the huge field of Cthulhu boardgames and RPGs lately, e.g. Cthulhu Wars by Sandy Peterson or the re-publishing of the famous "Horror in the Orient Express" campaign by Chaosium.

One new series which definitely stands out is the great Achtung! Cthulhu by Chris Birch (Modiphius). It is a huge and exciting World War 2 setting, where heroic soldiers and agents (including partially real heroic characters from the historic past) fight against the evil and madness of the Nazi regime. All of this including of course occult happenings and supernatural mythos forces from the Lovecraftian universe.

I'm pretty sure that Achtung! Cthulhu will be the next big thing. The last Kickstarter project raised more than 170.000,- GBP (whereas the initial goal has been 8.000,- GBP), and will bring us beside exciting full-colored hardcover books and lots of additional PDF Guides, also amazing miniatures and other fine stuff. I'm especially curious about the Investigator's and Keeper's Guide, and even more about two fantastic campaigns ("Shadows over Atlantis" & "The Assault on the Mountains of Madness") - I hope that I'll write about these great books here sometime soon.

The content and production value of the following Cthulhu adventures is outstanding. From the tight and exciting story itself, through the stunning artwork (beautiful maps and handouts!!) to the detailed historic research including pre-defined characters. I'm really impressed!! :-)


In the first part of the "Zero Point" campaign (which consists of five episodes), you start as investigators for the British Secret Intelligence Service in the early years of the war. You are dropped over Czechoslovakia and have to work together with the local resistance, to analyse scary happenings around the strange Castle Karlstein. Lots of people are missed and there are rumors about a mad doctor (Dr. Kammerstein) doing horrific things. It's a fine and exciting adventure with quite a lot of action, and lots of variants and possibilities for the keeper to lead through the story - depending on the gaming group strengths and preferences. Great atmosphere, very consistent setting and good twists at the end! 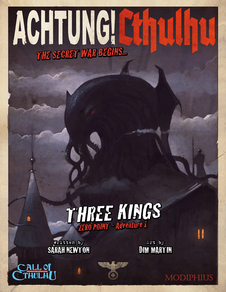 Part 2: Heroes of the Sea


In the second adventure of the campaign (also containing five episodes) you follow-up as investigators for the British Secret Service. This time you find yourself in Dunkirk, where 300.000 Allied soldiers are closed in by the Germans and need to be evacuated urgently. Unfortunately insane mythos creatures from the deep sea are making this unfeasible challenge even more hopeless. This time the story is more frightening and more mythos stuff is involved, also the preparation is even more perfect than "Three Kings", which is hard to achieve. I liked this story very much!

Get Achtung! Cthulhu - Heroes of the Sea for Call of Cthulhu from RPGNow.com 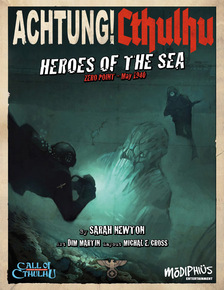 Of course both adventures can be also played as stand-alone session, depending on your plans and the availability of your group.


This is the first "pure" stand-alone adventure of Achtung! Cthulhu and plays in 1943 on the northern front of the war, in Finland and Norway. Mad German occultists are searching for a horrible and supernatural weapon out of the dark cold, whereas the question is, if the Allies can prevent these horrros from Norse myth coming to life. Great artwork (already the cover is awesome!) and very diversified dangers and challenges have to be faced, when the players have to cross enemy lines and have to interact with scary NPCs. The setting is again appealing and haunting - and you'll have a great scary time giving your best to save the world!

Get Achtung! Cthulhu - The Trellborg Monstrosities for Call of Cthulhu from RPGNow.com 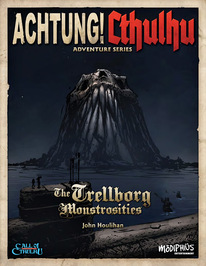 From the producer: Discover the secret history of World War Two - stories of the amazing heroism which struggled to overthrow a nightmare alliance of science and the occult, of frightening inhuman conspiracies from the depths of time, and the unbelievable war machines which were the product of Nazi scientific genius - and how close we all came to a slithering end!

Play a huge range of classic wartime heroes such as Russian political officers, German U-Boat commanders, British commandoes, RAF pilots, US rangers, Washington investigators, London journalists, Hollywood starlets, and resistance fighters from all across Europe, who must all unite in the battle against the darker side of World War Two. Play a full campaign leading from the opening shots of the War in 1939, through intrigue and adventure in Occupied Europe, the siege of Berlin in 1945, and finally the cold wastes of Antarctica in 1946!

FOUR ROLEPLAYING SYSTEMS
The world of Achtung! Cthulhu is a huge and terrifying World War 2 setting for four popular roleplaying game systems: Call of Cthulhu, Savage Worlds (Realms of Cthulhu), Trail of Cthulhu & The PDQ System (the Trail of Cthulhu & PDQ Conversions are currently in layout for Three Kings).