The book "Kingsport" is part of the great "Lovecraft Country Collection" and contains source material about the beautiful and scary village in New England as well as seven fine adventures.

In the first part of the book the village "Kingsport" itself is described and you find a huge and beautiful map, which helps a lot to get a good overview. Then the main facts of Kingsport are covered (e.g. population, weather,...) as well as the history, including information about the main events of the past. Another chapter describes in detail mythos relevant cults and happenings, which is very helpful for the keeper of course. A huge part then is some kind of travel guide for lots of other villages near Kingsport, which makes the source material complete and ensures a tight and detailed setting.

In the second part you find seven very well prepared adventures. Different topics are covered, all of them coming with detailed descriptions, beautiful handouts and good stories. One scenario is about poems and terrible events coming with them, another one is about a scary ghost ship and needs the investigators to go to the sea on their own. The artist scene is a setting as well as the hunt of a murder, also an exciting air fight above Kingsport is part of a scenario. Finally a "strange house in the fog" is the topic of the last scenario. Overall a great mixture of different ideas and settings, with more or less mythos involved, so most expectations should be fulfilled. Together with the valuable information from the source material, Cthulhu fans will experience great hours of roleplaying. 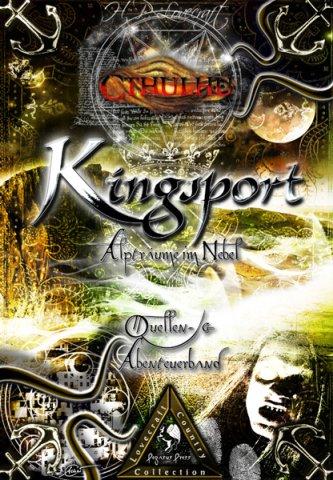 From Wikipedia: Kingsport is a fictional town in the writings of H. P. Lovecraft. The town first appeared in Lovecraft's short story "The Terrible Old Man" (1921). The town is also part of the Cthulhu Mythos and is featured in role-playing games based on the mythos.

The town is located in the United States to the southeast of (the fictitious) Arkham and corresponds geographically with the town of Prides Crossing, Massachusetts. It is based on Marblehead, Massachusetts, a real town that lies east of Salem. Lovecraft actually created Kingsport before he saw its real-life model. When Lovecraft visited Marblehead in 1922, he became enamored of the town and penned a glowing review in 1929 of his experiences there. Lovecraft wrote of seeing the snow-covered town at sunset and of experiencing his "first stupid glance of [Marblehead's] huddled and [archaic] roofs". He also remarked that "that instant — about 4:05 to 4:10 pm., Dec. 17, 1922 — [was] the most powerful single emotional climax during my nearly forty years of existence."

Kingsport was founded in 1639 by colonists from southern England and the Channel Islands. It soon became a seaport and center for shipbuilding. Influenced by the Salem witch trials, the town hanged four alleged witches in 1692. During the American Revolutionary War, the port was briefly blockaded by the British when the town's merchants turned to privateering against the British fleet. In the 19th century, sea trade dwindled and the town turned to fishing as the main industry. Kingsport's economy continued to dwindle into the 20th century and today relies primarily on tourism for income.