The Memoir' 44 Equipment Pack is the latest huge addition to the Memoir' 44 Universe - and comes in a big box, having the same size as the base game. The box contains over 100 miniatures (solid quality, no need to cut or glue), a rulebook, a scenario book and summary cards.

Beside armies (French Infantry, Polish Cavalry, Finnish Ski Troop, Italian Artillery) and other artillery, also tanks, vehicles and snipers are part of this expansion. There are 17 battles includes (11 Standard, 4 Overlord, 2 Breakthrough) where the new miniatures are heavily used. It is furthermore suggested to own the Terrain Pack, also the Desert/Winter-Board, to make the most out of the scenarios provided.

The battles can be definitely recommended, they are diversified, exciting and fun. The special rules make the games a bit more complex, but offer more strategic depth - which is absolutely worth the efforts for using the new rules.

Overall a very useful expansion (miniatures as well as scenarios), and especially for the Memoir'44 fans out there a reasonable addition to their collection. 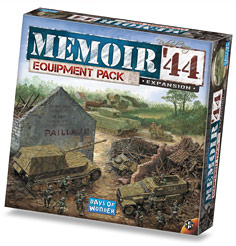 "World War II spurred the most frantic period of weapons development in the history of humanity. Countless new designs and concepts were fielded in the most diverse Theaters of Operations, often with great success. Mastering them made all the difference between battles won and lost." 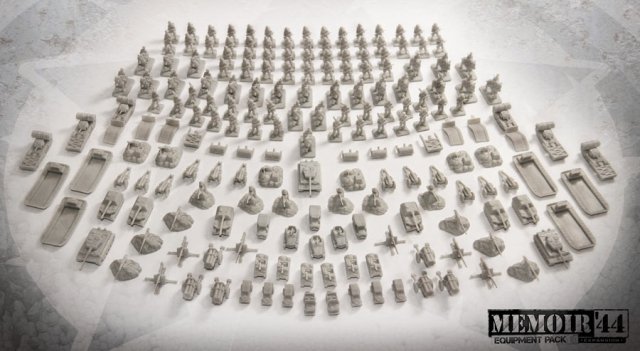 From the producer: Welcome to the Memoir '44 Equipment Pack, the largest set of figures ever released for Memoir '44. On D-Day, the Allied forces unleashed over 150,000 men and thousands of tons of equipment along the coast of Normandy. 68 years later Days of Wonder has introduced this major expansion to the Memoir '44 game system which fills a game box as big as the original board game and includes 186 plastic figures.