REX: Final Days of an Empire

Introduction/Theme
REX: Finaly Days of an Empire is a remake of the legendary boardgame Dune, which is settled now in the Twilight Imperium universe. The basic game mechanisms have been kept, and so the game is again about different races struggling for power, whereas negotiation and alliances play an important role.

Components
The game has been published by Fantasy Flight Games and Heidelberger Spieleverlag, therefore you already know about the premium quality of the components.You get a huge game board, beautiful battle dials, a very nice Dreadnought miniature and lots and lots of markers, tokens and cards. All of this adds to a really exciting atmosphere.

Gameplay
The game is divided into 8 rounds, with seven phases each. The most important resource in the game is influence, which can be used for lots of different actions. In the first phase you gain influence through different events, afterwards an entertaining bidding process for Strategy Cards takes place. In the third phase you recruit troops and leaders, which you deploy and move afterwards. Phase 5 is dedicated to battles, which are resolved quite simple and straight - also including usage of the beautiful battle wheels. The last two phases are reserved for collecting influence from areas which you control, and for finally seeing if the giant bomber fleet destroys some of your troops or not.

Conclusion
What makes the game really shine, is the fact that you can win alone - or together with other players, if your form alliances. If a player manages to control three strongholds in the city, this player wins, or control of 4 strongholds for an alliance of 2 players, or 5 strongholds for an alliance of 3 players. Furthermore different races have also different victory conditions (and also different abilities, which makes the game very diversified). These aspects (which remind me a bit of the old classic Diplomacy, which is good) make it clear that REX is more fun with more players, as there will be more interaction. On the surface it seems to be a rather straight area control and battle game, but there are many aspects and layers to discover - it's worth the time. Anyway you won't be bored, take your chance to explore and get to know this great interpretation of the legendary boardgame Dune. 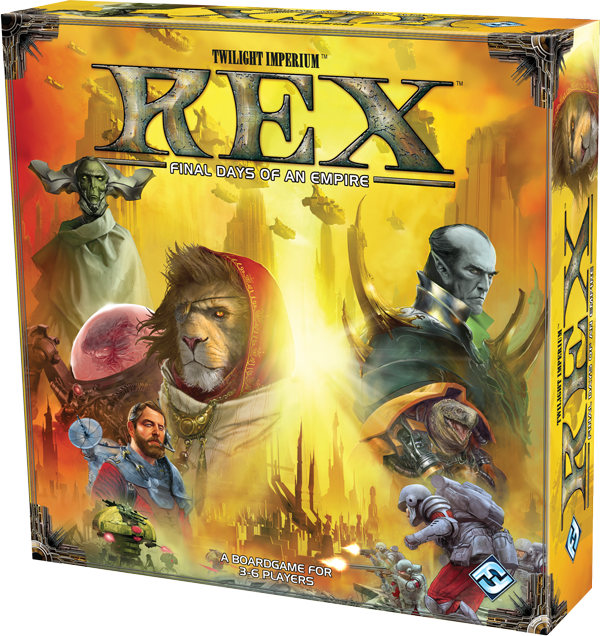 From the publisher: The final days of the Lazax Empire began in the seventy-third year of the Twilight Wars, when without warning, the Federation of Sol led a deadly assault directly on Mecatol Rex, the capital planet of the empire itself. A climactic struggle for control of the imperial city followed, fought as much with diplomacy and deception as with troops and starships. This is the story of that struggle.

Rex: Final Days of an Empire is a board game of negotiation, betrayal, and warfare in which 3–6 players take control of great interstellar civilizations, competing for dominance of the galaxy’s crumbling imperial city. Set 3,000 years before the events of Twilight Imperium, Rex tells the story of the last days of the Lazax empire, while presenting players with compelling asymmetrical racial abilities and exciting opportunities for diplomacy, deception, and tactical mastery.